It has been a month since the death of Saint Eclair. The institution of evokers known as "the Sewing Circle" is fractured. Without their beloved matron, a society already founded on trauma and sorrow is only growing weaker and more weary. In these unfortunate times of trouble, three cursed women watch from afar, plotting gleefully.

There will come a time soon that all who had ever been touched by Saint Eclair will find themselves little more than kindling to the Horns of Scorn. 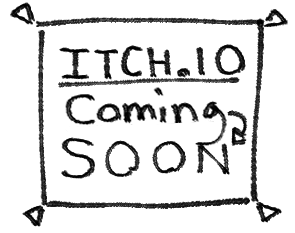 ...and before the sun had even set, there wasn't a single burrow in the Forest that hadn't heard the news that the beloved Saint Eclair passed away that morning.

Though she had acted as the First Seamstress of the Sewing Circle for many years, her home was nestled far from that grove, in seclusion. There, she and her daughter lived alone in solitude. Withdrawn. Quiet. Unfortunately, this meant that the fire had been raging for hours before anyone had seen the distant smoke and was able to reach the clearing. By then, it was too late to help. There was little left but ash and it had quickly become clear that there was no one to save.

However, had they only arrived sooner, they may have been witness to a strange sight. As the mansion collapsed under the weight of its grace, and as the flames licked the canopy above, a woman and her companion sat on a nearby hill, watching it all with a solemn gaze. Hand-in-hand, leaning against each other, they were silent for a long, long time. It was only when the burning had weakened to fickle embers that they finally stood up and made to leave.

"Where are you going to go now?" the dog asked, "have you been saved?"
"I'm not sure. I'm not sure that I shouldn't be dead," the deer plainly replied, "I don't even know what living should feel like from here."
"Well... If it's alright by you, I would like to remain by your side. It would be even nicer if you were alive for it." 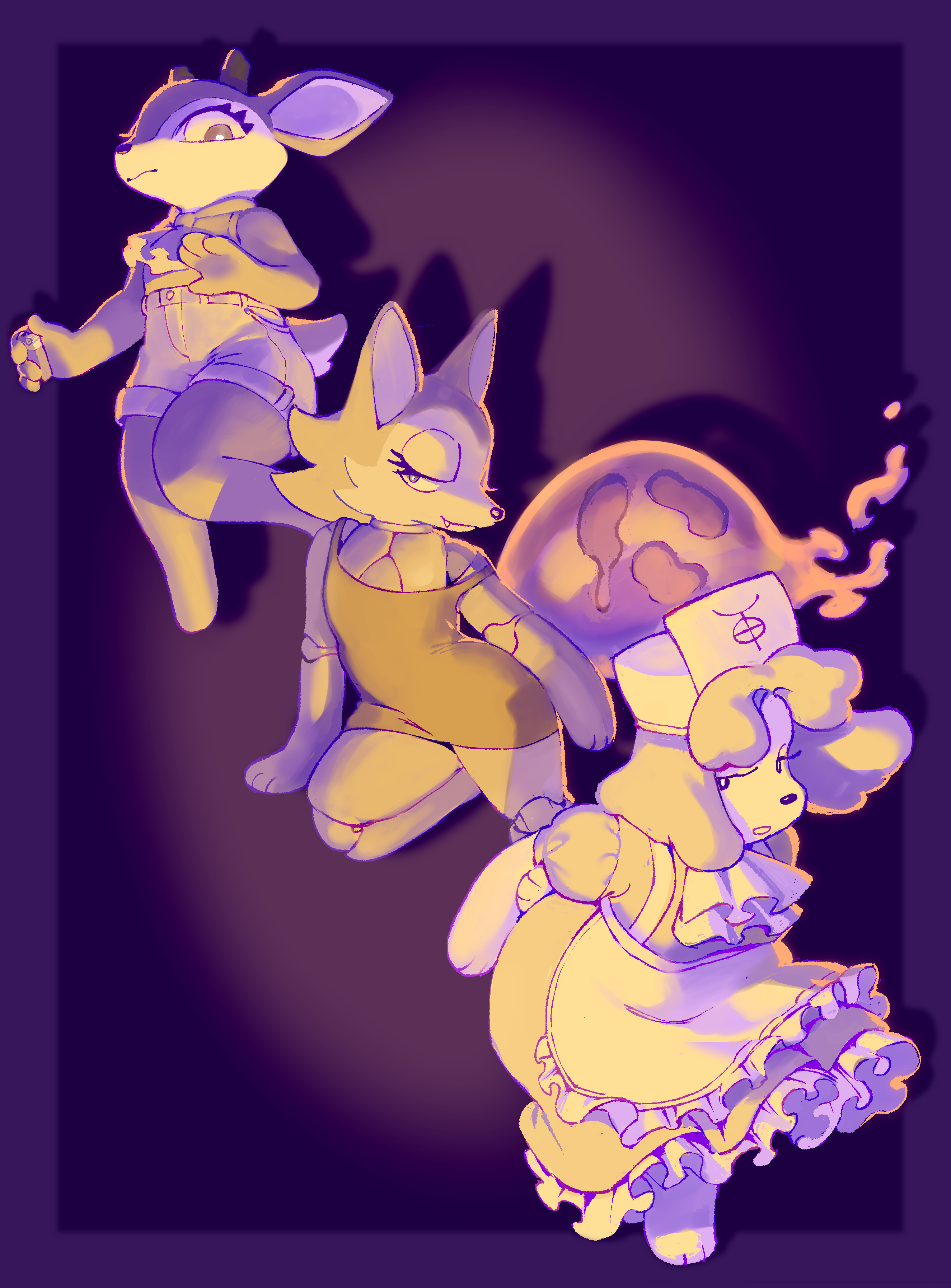 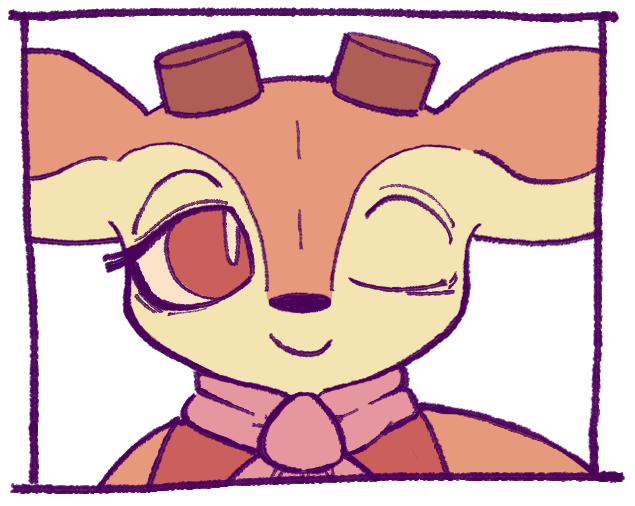 The Modern Saint, Eclair, was an uncommonly talented cursebreaker. Spontaneous and spirited,  she traveled from the Mountains to the Meadows with her plucky partner, Peaches, exorcising relics. At her journey's end, Eclair returned to the Sewing Circle (as all evokers must) and the rest of her life was spent guiding the organization, as well as mentoring the hems under her.

Before her adventures, Eclair mothered a recluse, Teacup, who eventually perished in the same mansion fire that took Eclair's life. Little is known about Teacup’s talents, if she held any, and she lived in isolation, having not stepped into the Circle’s grove in over fifteen years. 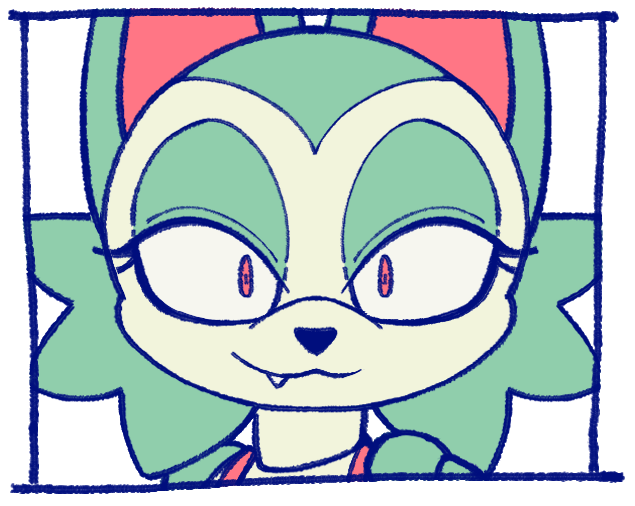 Referred to as "The Tail of Scorn", Plume's origins are as enigmatic as the rest of his associates. Using a doll as a vessel, he claims to be the former paramour to an ancient evil and flirtatiously toys with friend and foe alike, untroubled by violence or the spectacle of their chaos. Plume's wholehearted love of flowers and his magical affinity towards them, however, betrays a gentler side to a soul seething with hatred and regret. He says that his desire is to plant a garden in the ashes of Scorn's inferno. 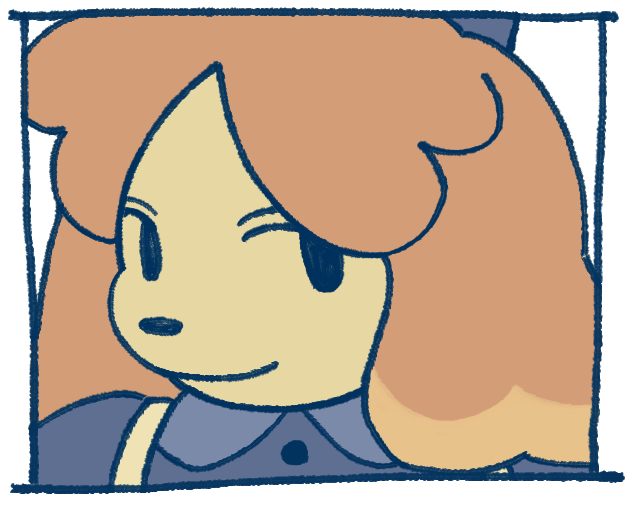 Referred to as "The Paws of Scorn," Mellow has shown impossible powers that defy any domains of evoking... as well as a malevolent agenda that seeks to destroy the Sewing Circle itself. Though she speaks amicably and openly, her actions paint the picture of a violent woman devoid of care for anything in the world but her master. Lacking any registration as an evoker, or even a known history, it is as if she manifested from nothingness itself solely to enact the will of Scorn.

Dutiful and devoted, Peaches was a cursed child who adventured side-by-side with Eclair for much of her early life. While she had grown to be a capable swordsman, her true value has been in the unique makeup of her body. As if enchanted, her blood is speckled with crystals that disrupt the flow of aether and the Sewing Circle has made great use of it in research, or practical applications such as potions. It is within the grove of the Circle that Peaches remains to this day, happy to be of use at all to the woman who had once rescued her. 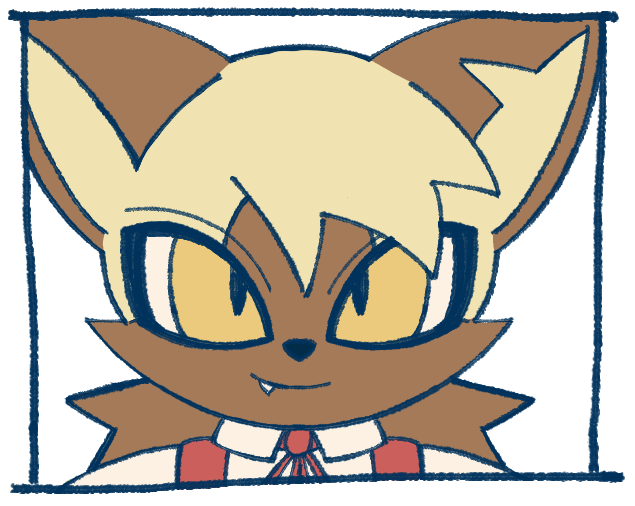 As a child, Dewdrop was one of the many orphans left behind after the Forest's most recent Family Reunion. He was rescued by Marmalade (who recognized the burgeoning sickness of the child's powers) and brought into the care of the Sewing Circle. In his adult life, Dewdrop has distinguished himself with the study of blood and its aether, developing a long-lasting partnership with his subject of research: Peaches. After the death of Eclair and the disappearance of Marmalade, Dewdrop has now found himself unwittingly next in line to be the First Seamstress of the Sewing Circle. 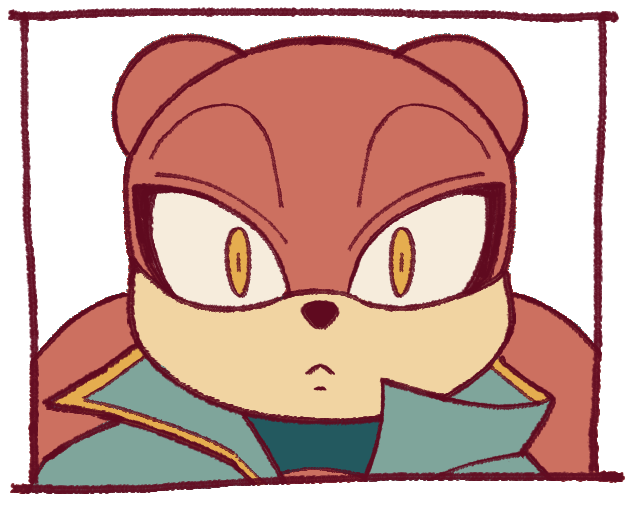 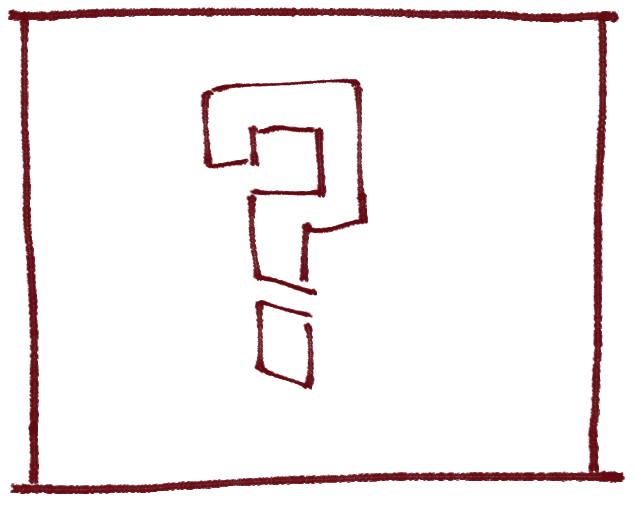 An imposing woman of few words and even fewer friends, it would be a rare sight in the Circle to see Marmalade above-ground. Perhaps that is why it did not come as a great surprise when, on the night she was to succeed her old partner Eclair as the First Seamstress, no one could even remember the last time they had seen her. Where and when... had she gone?